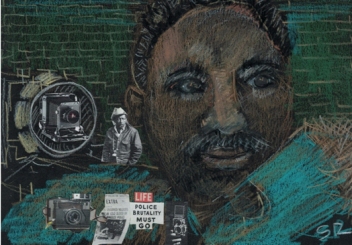 He was truly a self-made legend who came up during hard times. He was born in Fort Scott, Kansas in 1912. His mother died when he was fourteen. When Parks started supporting himself, one of his jobs, supposedly, was at a gentleman’s club where he observed how wealthy people spent their leisure time. He was surrounded by books there and was able to delve into an exciting world of literature and the arts. He bought his first camera at age 25. Boxer Joe Louis’ wife, Marva, was impressed by his work and helped him get started. Parks was not only a photographer, he excelled in music, film-making (Shaft and The Learning Tree), writing, and composing.

One of his most famous photographs is American Gothic. It seemed that Parks had the creative Midas touch, and was able to achieve what he set out to do, for the most part, and that is to inspire the world… to shake up the collective unconscious.

Parks shared,  “The guy who takes a chance, who walks the line between the known and the unknown, who is unafraid of failure, will succeed.”

Today, do something creative! And remember you are loved and you are never alone.