They won’t tell
directly
or even acknowledge
the sparkled laser
sent without motive.

They even stole my azure blue.

When doubts threaten to flood

I lift the brush. 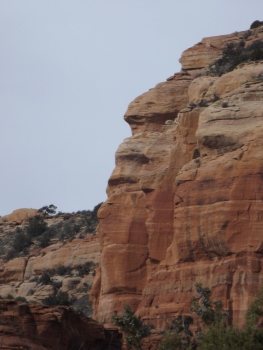 This was a really tough assignment. Concrete poetry is intense. I’ll be working on learning that in the five year plan. It’s going to take some time. On to the next project.

I wanted to make the words look like the condor, but that is going to take some skill. I don’t know what is wrong with my WordPress format but it is really frustrating to figure out the technology. Someone told me Word doesn’t copy and paste well into the online format. Well that’s  no fun. Who’s in charge here anyway? No art for you guys tonight, sorry.

Plus I can’t stand this font size. Going to sleep, kindred spirits and fellow poets.

Lizzy came around yesterday to check for blueberries. If you remember,  I thought maybe  Ms Kingsnake had stalked and eaten her. Or him. I don’t know. I watch the creatures I don’t pick them up. The gender thing is a mystery.

The reptile sexual identity topic reminds me of another story, a true tale of an iguana I named Horatio. One day Horatio scampered onto the back porch and hung around by the screen door, watching.  Part of his little toes had been bitten off. But he had spunk.  And he had the prettiest bright blue patch on his throat. At first he scared me, but then we decided we liked each other.

Horatio became a beloved low maintenance, rather dapper outdoor  pet. He came around daily on a regular schedule. Soon, he went out and got himself a girlfriend whom I named Hortense.  They showed up together  for lunch  with Hortense always hanging back in  shyness.   After a while Horatio and Hortense stopped coming around altogether  and I feared the worst. Months later during  spring cleaning we found the two iguanas curled up together at the bottom of a terra cotta pot. They had not survived. The clay was too slick and smooth for them to crawl out.

As we settled into our lifestyle here, I survived college, started a little book business,  and Jesse’s life was saved by an expert medical team who fixed his heart. We had it goin’ on. Then one day another character showed up. 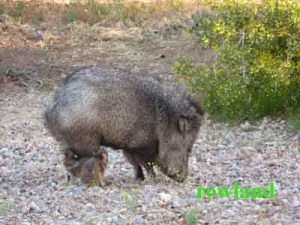 Enter Mama Javelina, (Yayassu tajacu), or collared peccary.  I named her Bella.  Bella strutted into the back yard with her stiff legs, pointy hooves and distinct style. She grazed the perimeter of our plot which is about an acre of fenced land. When javelinas make an appearance other critters take notice. Dogs go crazy and wild pigs can do serious damage to dogs…and sometimes people. You don’t want to mess with Mama Pig, or any wild boar for that matter. Bird seed on the ground and a pan of water must have attracted her to the area behind the back porch.  She wandered in, snorting and rooting,  piggy-toed and poking. She swagged in busy and unafraid with her two little ones trying to suckle-a woman on a mission.

Then, just as boldly as she had entered, Bella strolled out of the open gate without so much as a snooty  goodbye.  With her babies in tow, down the road she sauntered in  search of  food.  Yes, javelinas are dangerous. Don’t get me wrong.  I didn’t encourage her. And before anyone goes all bacon on me, I didn’t feed them. I give the original inhabitants of the Sonoran landscape a wide berth.

On another note, about humans and animals…. and…reptiles too.  The collage below is one of my SoulCollage  ®   cards representing aspects of  my journey. Briefly, part of the process is to describe parts of your life with an “I am” statement. “I am one who observes with detachment and passion.” What I love about living in the country is the freedom to be among the creatures without disturbing them. 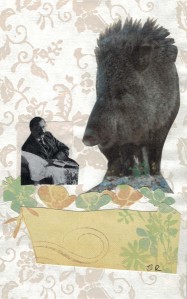 Above symbolism of my collage: the detached observer is the  male side, the animus,  (man reading  ) representing the non-emotional, the scientific.  The  commanding curious and over-protective part represents the anima, (javelina) and is the female archetype. Both are observing of the other.  If all this sounds like mumbo-jumbo, it is. It’s basically Jungian psychology.

Discussion: I was going to include some personal anguish over writer’s ego in this piece. When I was writing about Horatio years ago, my blog got “scraped.” Two years of work got lifted and so did the names for some of my characters. Copying equals flattery but then it becomes plagiarism. There is nothing new. Everything has already been done. It’s all variations on a theme. But  really….pilfering names? Come on! Get your own names! Sigh.  One person in my writing group actually used the name I had picked out for my main character, along with some other phrases. The person said, “Oh I like that. I think I’ll use it.” And so she did. And ouch, I bit my tongue.

I have tons of pilfering stories, but they are being maturely pushed down into the discussion section of my little funky blog here. I came, I saw, I vented.

I was in college during the Horatio years and, as always, journaling and taking notes. A particular instructor didn’t like people taking notes, especially women over 50.  During class the teacher sauntered back to where I had written something (privately), walked back to the front of the class and presented my exact words as his own psychology theory. Now I know better. If you like it, put a ring around the copyright symbol.

What does that have to do with desert creatures? It’s a competitive life. I decided not to go more deeply into a personal rant because the victim role just doesn’t suit me anymore. Life goes on!

This is a work of creative non-fiction

Most authors will tell you to write what you know. In  journaling, jotting down dreams, images, and thoughts is an immediate way of connecting the human experience with daily life . The things I know most clearly are the magnificent Pacific coastal mountains and for the past decade, the desert.  Nature is the most extraordinary and uncontrollable panorama, and to me, always exciting.

Nature and the solace of the uncontrolled, non-domesticated life patterns are precious beyond measure. Each day is an unfolding chapter, often predicable, like the gathering of birds to water… and sometimes crazy.

It’s hard to believe there are some who want to destroy the most profound, and yet undiscovered life systems by over-development for profit.

This poem is dedicated to the theme of knowing.

You stepped out into the clearing

into the landscape of an eternity.

Born before the destruction

Journal prompt: Write about wild animals. Do you live in a place where you can enjoy them? How do you feel about wilderness preservation and development?